(Most photos taken by Sidney. Feel free to click on them and enlarge accordingly.)

So recently, Sidney and I decided to have a hike out in the woods. I had done some quick research and found pictures of an absolutely gorgeous lake called Bismarck Lake. As we were heading to Flagstaff, I decided to throw it out that we leave early and get some hiking out of the way before we settled in for the evening with friends at a house. The landscape was absolutely gorgeous.

In order to get to this trail, you head out on highway 180 northbound. You’ll come across Hart Prarie road, aka FR 151. You then proceed east on it for some time. FR 627 will be on your right. Take it to the end, and you come across Bismarck Lake trailhead.

As we started heading north on the highway out of Flagstaff, we encountered a nice thunderstorm. It helped remind us that we were definitely out of Phoenix and in the high country. We were amongst a few other cars heading into the weather, but the smell was amazing. The soaked ground, combined with the pine permeating the air, gave a great reminder of where I grew up and enjoyed being in. Soon enough, we came across the road (which I had to make an abrupt and bumpy stop for, as it was quite sudden). 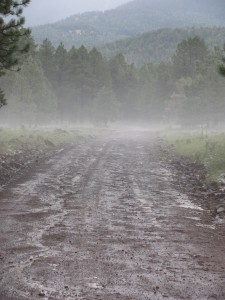 As we followed the road out, the rain had subsided to a sprinkle, which was likely being filtered by the overhead trees. As the sun had been beating on the ground an hour before, it was apparent that the ground was warm as fog was lifting out of it (as shown in some of the pictures). Driving through some of these areas, we found small hail still on the ground. The weather had been more fierce before our arrival. This did not even phase us a bit; Sidney was busy snapping away with the camera and being in awe, while I drove through similarly taking in the surroundings. We found several parts of road that looked ominous and very spooky. But it was very cool-looking.

It was at this point that I had decided to put on some music from Kingdom of Heaven and 13th Warrior, to help enhance the mood a bit. We both admitted it did have a feel of viking about it. It was unmistakable.

A bit further down the road, Sidney’s eyes lit up. We had encountered aspen, but Sidney immediately described it as a “white forest.” The trees were very prominent here, and had taken up root together in a very specific section that treated her with such eye candy. 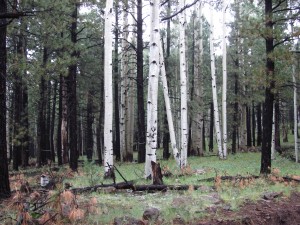 I had hoped that we’d see them in greater density than her picture would show. And more often, they did. We continued our drive in and were greeted by even more hilly countryside that was enveloped in that weather of fog and light misty rain that called out to us– or at least to me, I am sure, for following. Occasionally we’d pass a house that was within the wilderness. Sidney and I would make remarks of envy about their location in such an amazing place. It was my sincere hope that they would not take such a thing for granted, as days like these would be rewarded with porch time. 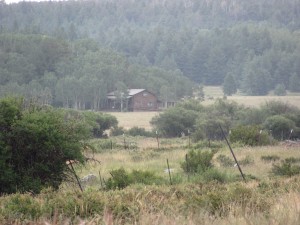 I eventually took a turn off the road to FR 627, which would take us in a mile or so further before we would come to our stopping point before the hike. Sidney had urges to run out into the woods and then back to the truck, which I entertained with a simple gesture of “go play,” to which she’d squee and run off for a moment. I’d let the truck go forward a bit more. I remember once in particular that I had stopped to plug in her phone for it to charge from the truck. In the time it took me to look down, plug the phone in and look back out, the sun had come out in full force. It was as if it wanted to say, “What? I wasn’t gone this entire time.”

We eventually made stop at the trailhead. I pulled out my 30 lb pack and water, restocking it with fresh water we had purchased at the store prior. The hike was supposed to be quite easy, so I thought it’d be worthwhile to take the pack on a mild hike to get myself used to it. After placing my knife on the backside of my pack, and doing some minor stretches, we were off.

The trail used to be a road that was shut down by the Forest Service, as was evidenced by the burms, rocks and logs that had been put in the way to prevent travel. It was a mild grade that we went up to make it to the clearing. Overall, the round trip of the hike was supposed to be about two miles long. It’d be a good conditioner. 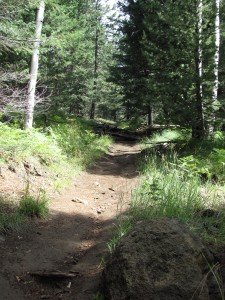 The trail was quite bright for a bit as we started our minor ascent into the prairie. The ground was wet still, and there had been steady rainfall over the last while. The twigs refused to break, which was a good sign for this forest. It was quite retardant from any fire, amid the several blazes that were about the country. Immediately I felt a mild burn in my thighs as I was heaving roughly 280 lbs forward, and Sidney was stopping every bit to take pictures.

Eventually after a final grade, we made break out of the tree line and were greeted by an amazing view of the San Francisco peaks. Growing up, I had only ever seen the south-facing side as I looked north. Being this close to them reminded me greatly of how immense these mountains were. Dubbed the San Francisco Peaks because explorers early on claimed they could see San Francisco from atop them, their colossal size and overall beauty stunned me for a second.

Sidney was too busy looking at the woods to notice the first glance. I tapped her on the shoulder and she looked up with an expectant, “Hm?” as I pointed her forward. This was followed by an “Oh wow” as she stopped to take in the same thing I had moments before. 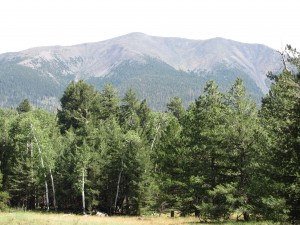 One of my parents had told me growing up that if I were to line my fingers on the outside of the peaks in a tent fashion, that the remaining gap above the mountains themselves was actually how tall the mountain was before a large volcanic eruption. The eruption spread cinder for hundreds of miles. The current area was not immediately dotted with cinder, indicating a rather powerful blast if the eye of cinderless land extended out this far.

At about the trail split to either Bismarck Lake or an Arizona trail, we ventured left to find the lake. During this time, the camera died out and I cursed myself for not having remembered to put batteries in the pack for the camera itself. After several more minutes, we came across what looked like a dried out tank. This, as we found out later, was indeed Bismarck Lake. It had been dried up over the summer; my guess was that it’d be replenished in the winter and spring, and would likely be more full later. 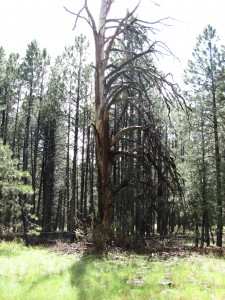 However, Sidney and I did not realize this was Bismarck Lake, and set about making jokes about how that was the lake, intent on finding it still. So we continued hiking eastward, following the trail to its right at all times, eventually coming to a run that went into a deep descent. The trail was turned into deer run, as was evidenced by hoof

We probably descended about 80 yards before we decided to come back up. We did stop to take in the scenery, as the forest was absolutely green, dark (partly due to the new overcast clouds that had moved in) and quiet.

It had been a long time since I had been in a location where all I heard was nature, and I didn’t hear a road off in the distance, or someone playing music or any of that nonsense. It was nature quiet, spare for the woodpeckers that would be on the trees making noise. It had startled Sidney a few times (and roused my senses, admittedly) when something would fall from the trees. Sidney’s concern was that big things could climb trees. I logically countered with, “If something was in the tree, we’d see it.”

At least, that’s what I thought, partially to put fears to rest. 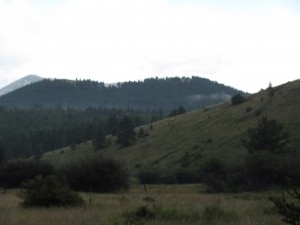 We came back up eventually, taking a second split that was still even and well-worn. We found a secondary split that branched right. We investigated it briefly before determining it to be another dissipated deer run. We moved back, and took another trail down. It wasn’t a very steep descent, but the trail had been worn by feet and was very stable. The descent was taking a continual toll. I had no idea I’d be hauling around the pack for that long, but I kept pressing on.

As we took the trail, we came across markings on the tree. Lovers carving initials and years into the tree, in a standard fashion. Helping to reinforce the ominous factor, the words “Life feeds on life” were carved into it the most, probably the biggest of the text on the tree. I had again cursed myself for forgetting the batteries. But, knowing the hike now, I could probably come collect photos later.

Eventually the land flattened out again. Determined to find our lake (doh!) we continued forth towards a new set of hills. We both agreed that a lake would most likely be there due to run-off that would collect at the bottom, and there were several natural ditches indicating that there had been runoff before. We stopped at the base for a moment and I found a plaque. It was a C. Hart Merriam camp site plaque, commemorating a place of historical importance. As I would have found later, this was approximately  a 2.5 miles hike from the Bismarck Lake trailhead. And we were continuing on.

Invigorated by the flat land, the fence alongside the trail that doubled as a road, and enjoying the overall sense of adventure, Sidney and I pressed on at a moderate pace. We continued on for probably another half mile before I facepalmed briefly and said, “Are you kidding me?”

“What?” Sidney asked, concerned. I pointed ahead. Forward of us was a gate. It was the typical “road closed” forest service gate. We had made our way back around to another road– possibly Prarie Hart at its end.

We steeled ourselves for the long march back to the truck. Sidney was kind enough to take the pack off my shoulders, as I was having to stop several times along the ascent (out of shape was rearing its ugly head). After a few moments, she too was stopping. “I now understand why you had to stop so much.”

We agreed once we reached the flats, I would resume carrying it, in case I needed another rest on my limbs on the descent back down to the truck. We made it, performing a 3.5 hour hike and hiking (roughly) a total of 8 miles in mountainous terrain. Go us!

But, I will be stopping by there again, this time more prepared and perhaps with a few more people to enjoy the adventure. Hope you enjoyed the post!